THE TECHNICAL STANDARDS FOR JUDO & MARTIAL ARTS MATS – AN OVERVIEW, 2006


BY C.NASH - BRITISH STANDARDS INSTITUTION REPRESENTATIVE TO THE EUROPEAN COMMITTEE
FOR

THE FORMULATION OF SPECIFICATIONS FOR MATS USED IN SPORT.

The author has just completed his 50th year in judo which he first took up at King's College, London in 1955. Within 3 years he was Captain of the University Judo Club from which time, he has been directly involved in sourcing judo mats when he started importing them from Japan. He went on to become a 4th Dan with British International status and represented the British Universities Judo Association to the National Executive committee for many years.

In 1974 he formed a company now trading as Shogun International Ltd (www.shoguninternational.com) which has been a pioneer in martial arts equipment, specialising in the production of modern products, particularly judo mats which the author personally has made in thousands!

Contrary to impressions given elsewhere, the modern tatami pattern vinyl covered, high density judo mat with cellular antislip was introduced into the UK by Shogun in 1975 and has been copied by several companies since. None of them can claim the highest specification which is associated with the Shogun product marketed as SUPERMAT which by the measures of the published technical standards, is the market leader in the UK .

Unlike many other companies which all too often market a product without any particular technical knowledge (see article entitled ‘Buyer Beware'). Shogun has manufactured for decades the now standard SUPERMAT which was used exclusively to formulate the British Standard for combat mats (see below BS1892 2.10) and was used together with other European mats to specify the technical parameters for the European Standard (see below BS EN 12503)

In 1985 the author was co-opted through Trade Associations to a newly formed British Standards Committee constituted to formulate a technical standard for mats, mattresses and landing areas used in sports. In 1990 he was appointed by the British Standards Institution to represent the UK to the European Technical Committee on Sports Mats.

It is noteworthy that only one country dissented – France !

As far as the UK is concerned, this Standard was never accepted, is totally defunct and anyway was intended primarily for gymnastics. One judo mats supplier is currently reporting that the EJU still seems to be referring to this outdated standard!! (see below).

This standard in modified form as BS 1892 Part 4 is relevant today (see below) but not for judo.

Countries outside the European Union have made inputs into technical standards

technical matters and as such, is not involved in the political issues of the EU.

At the first meeting, the French delegation announced to the Committee that they had a French National Standard and that in effect, they would like to introduce this Standard (presumably unchanged) to the Committee for acceptance as a formal European Standard. It would not surprise many readers that this proposal was emphatically rejected, particularly by the British contingent which, as mentioned above, was bringing to the table its own national standard published a short time previously. At a later stage, M.Besson of the French Federation and currently (2005) Technical Director of the IJF made a further appeal over this matter directly to the assembled committee but the proposal was again rebuffed.

A particular difficulty over acceptance of the French Standard was that a much higher percentage of mats in France are laid permanently and this enabled the French to recommend a mat which was 50mm thick and correspondingly too heavy for portable use. It was also noted that in France where mats were not permanently laid, 40mm was almost invariably used. It was very clear that most representatives came to the table with the remit to specify a portable mat and for this reason alone, the French proposal never really had any chance of being accepted. From the consideration of weight, a 1m x 1m mat would have been practical. However the cost per square metre would be extremely high and it was felt that the Standard should be such that costs should be a consideration and in any case, by far the greatest demand was for a 2m x 1m mat which of course would have exceeded the acceptable portable weight limit.

The size and weight of the mats from the French proposal were not the only considerations. In particular, the French muddied the water by proposing two standards – one for ‘contest' and a different specification for ‘training'. This is not the place to make further references about this thorny issue since to an extent, some aspects of the partly privileged discussions are covered elsewhere together with other technical matters which were finally incorporated to form the Standard. 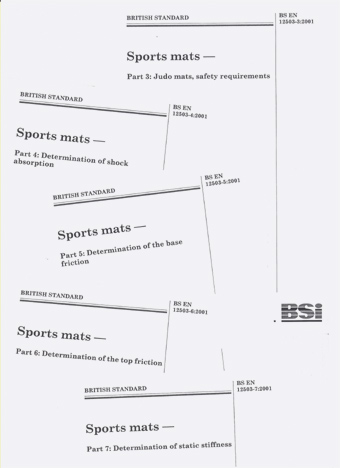 Over a series of many meetings in Europe during the nineties and with all the major countries represented, the Committee consisting of national representatives and technicians from scientific testing houses in the UK , Germany and France agreed testing criteria and methods. This done, the results from tests conducted were analysed and the test limitations were decided unanimously except for France which dissented ( the country, you will remember that made the original proposal!!)

During the deliberations, the Convenor informed the Committee that sports mats were to be incorporated into CEN standards as a safety product . The significance of this is that the longer term intention is to make the Standard mandatory (in much the same way as the specification for motorcycle crash helmets is today).

Interestingly, the Standard allows for the mats to be either 40mm or 50mm thick. The French Standard is achievable within the European Standard at the 50mm thickness.

EN 12503 is divided into 7 parts. The first 2 parts relate to gymnastics and therefore do not concern us here. The 3rd part relates exclusively to the requirements for judo. The last 4 parts refer to the test methods used for all types of mats. This is why the reference for judo is parts 3 – 7 . The Standard was published and came into effect in 2001 and applies to all the 28 countries (2005) which defer to CEN Standards.

When a European (CEN) Standard is published, any previously existing and contrary national standard duly becomes obsolete. The British Standard 1892 2.10 mentioned above therefore became obsolete at this time except for combat situations which were not judo. As far as aikido, jujitsu, karate and all the other martial arts are concerned, BS 1892 2.10 IS STILL APPLICABLE in its test details – both the criteria and their parameters . With the above in mind, I was asked to re-draft this Standard by the British Standards Committee and it now stands as BS 1892 Part 4 published in 2003.

You may feel that some of the requirements are not appropriate for your sport, particularly in relation to wrestling. So how did this situation come about? When Sports Associations/ National Governing Bodies were approached in the early 80's to make input to a sports mat standard under the aegis of the Sports Council and the BSI, the response was such that effective representatives only came from gymnastics and judo plus manufacturers of the relevant products. Others came and went but many did not last the course which took place over several years of discussions, particularly complicated by the time taken up over fire risk issues raised by the Home Office after the fire in 1984 at the Maysfield Leisure Centre in N.Ireland where sabotage resulted in some sports mats being ignited and causing loss of life. This issue arose during the early stages of discussion and in my opinion took an excessive amount of time.

Subsequently and partly due to the constraints of time caused by the fire risk issue, sports mats were only classified into 4 types: 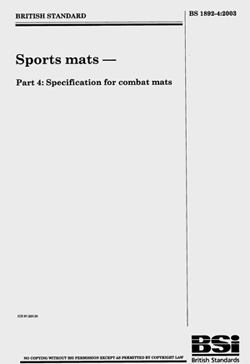 It is worth noting that ‘ combat ' is the only situation where the mats are required both for performing on and for landing in an uncontrolled manner. (Unlike the European Standard, there was no specific reference to judo).

When the European Standard was published, it covered all the landing, falling and floor exercise situations and has therefore in these respects superseded the British Standard BS 1892 2.10 mentioned above. However since in combat situations only judo was considered, all the other martial arts remain tied to this modified British Standard 1892 Part 4.

BS 1892 2.10 was thus stripped of all technical performance references to other than combat situations. The now much briefer standard BS 1892 Part 4 is what remains and will likely remain forever unless serious representations are made by other combat sports for changes to suit their particular needs.

Why is this important for judo clubs? Good quality mats should last perhaps 10 – 30 years depending on how often they are used but more especially on how they are handled. It is very likely that over this long period, a judo club may have already (or in future) a karate, jujitsu, aikido or other activity on its mats. The problem is that if someone outside judo practice is injured and alleges that the mats are involved in the causation, it is going to be this revised British Standard which will be referred to in litigation, not the European Standard. Since there are many more ‘martial arts' clubs using mats than judo clubs, another consideration is that if the club wishes to buy new mats or to cease existence, the old mats which conform to this Standard, will be more saleable if they can be sold for any type of combat activity.

It will probably come as no surprise that currently (Sep 2005) there are only 10 companies with this ‘approval' – none of them from the UK ……. Why the mat has to conform to one of the two French Standards completely escapes me. At least the European Standard is the only internationally agreed scientific standard for judo, albeit limited to Europe . To the best of my knowledge, there are no USA or Asian Standards that could be considered. Furthermore it is not clear how France still insists (as it does) on its own judo Standard within Europe , let alone at the wider international level. It is worth repeating that the agreed protocol in Europe is that a national Standard becomes obsolete upon publication of a wider ranging European Standard.

Paying US$32,000 over a 4 year period, a company is clearly going to have to recover this outlay, presumably increasing the price of its products?

What value therefore is ‘IJF approval' with regard to the quality or price of judo mats? This said, it is good to see that some companies are in the position to financially support the IJF since without this support, it would be difficult to see how the IJF could finance its affairs and particularly how it could provide officials for major events.

Well, in some astonishment, I checked with the ISO organisation directly and through the British Standards Institution. It seems that the only ISO standard relating to sports mats is the above mentioned ISO 5906 – clearly by any measure not applicable to judo and superseded long ago for any European country.

I have not been able to obtain any other information of relevance even from the EJU and so I look forward to being better advised, hopefully by the EJU itself when and if this article comes to its attention. For the time being, you may obviously wish to bear this in mind if you are encouraged to buy mats as a result of their being ‘EJU approved'.

Note : There are no current proposals to introduce any new Standards nor to modify any existing Standard